It may be easy to say who won the race or even who came second, but how easy is it to say who came tenth or who recorded the fastest lap? The timekeepers, a dedicated team of officials, record every lap that each competitor achieves and thereby the position of every competitor in the race.

Contrary to popular belief stop watches are not normally used, nor are most races timed automatically. Most of the races are manually timed with the aid of computers. As each car or motorbike crosses the timing line a timekeeper pushes a button. The timekeeper who pushes the button is not concerned with who crossed the line, only that someone crossed the line. Other timekeepers record the order that the competitors cross the line. One of the timekeepers enters the order into a computer. The computer then matches the time pulses generated by the button pushes with the vehicle numbers entered. From this the lap times can be calculated.

The computer system also generates a graphics screen that is then converted to a TV signal and transmitted to the pits etc. Anyone in the pits with a television can receive the signal and the pit crew can see what their car is doing on the track.

For some races an automatic system is used. The cars carry a small transmitter and an aerial cut into the track at the timing line receives the signal and this generates both the timing pulse and the car recognition. Manual button pushes are always done in duplicate though. If a car looses its transmitter the timekeepers need to know the time that the car crossed the line. The manual time pulse would in this case be used as the backup. 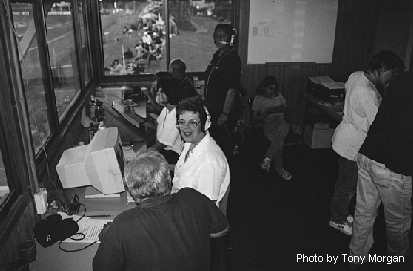 One of the most difficult skills that a timekeeper must master is the rapid recognition of the vehicles as they cross the line. In close fought races three or four timekeepers may each be writing down the order that the cars cross the line, (the running order). This in it’s self sounds easy, but try it for yourself. Write every car number down in order that they pass you without missing one and you can start to appreciate the skills required.

The timing system at Mallala Motor Sport Park requires four computers networked together to keep up with the amount of processing required to do all the functions and to allow enough operators access to the data.

The Austin 7 Timing Team also upload most events results on to the ‘Natsoft’ web pages within a few minutes of the event finishing.